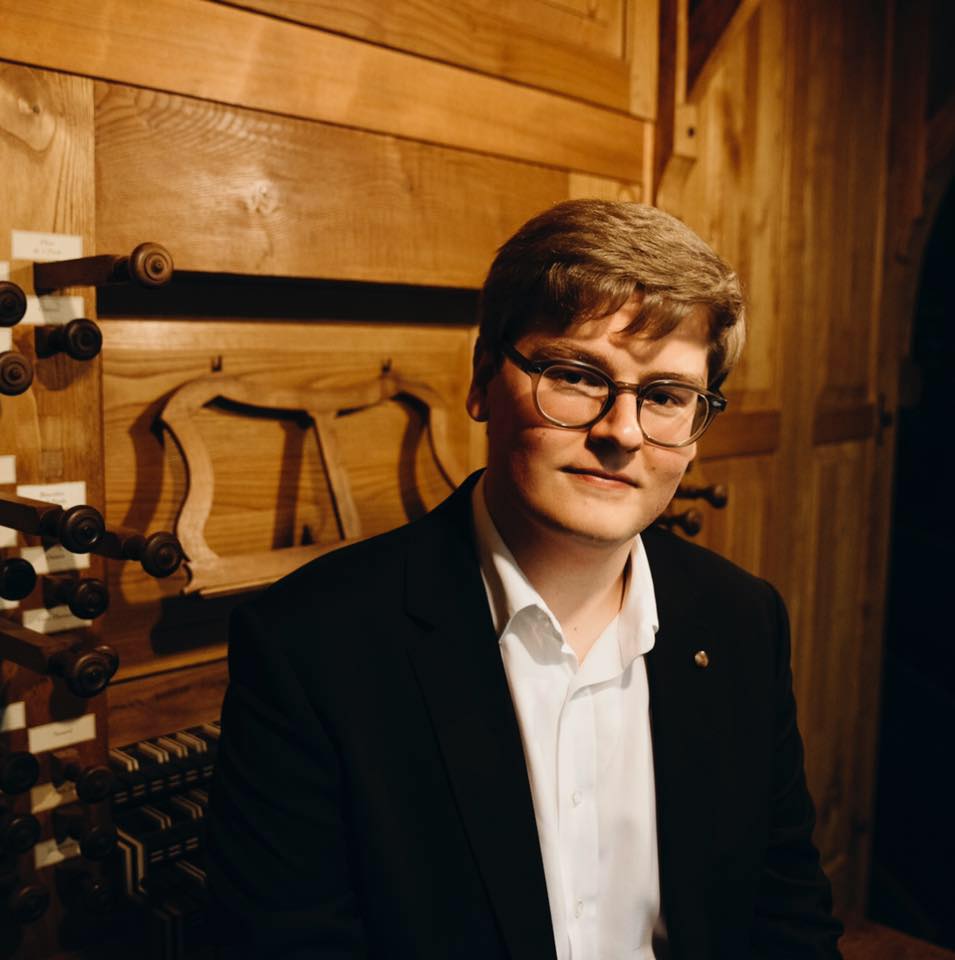 Pieter De Vos, born in 1996 in Lier (Belgium), has been interested in music since a very young age. After studying the violin via to the Suzuki method he started to take solfège courses at the Broechem academy, a sub-division of the academy in Lier. When the choice of Instruments had to made, Pieter chose ‘The King of instruments’: the organ. After studying with Carl van Eyndhoven for a year, Pieter took courses from Peter Pazmany. With him as his teacher, Pieter completed his organ classes in 2013, after which he went to study at LUCA School of Arts Leuven (campus Lemmens). His teachers in Leuven were Luk Bastiaens for organ and Peter Pieters for improvisation and accompaniment. After graduation he followed the Saint-Ouen Masterclass in Rouen with Jean-Baptiste Monnot.

Pieter’s second passion is composing. He has completed his bachelor’s degree in composition at LUCA School of Arts with Piet Swerts and Kurt Bikkembergs and he has already written a few works for different orchestral instrumentations:Twee Voluntaries voor accordeon, Pièce Comique in 4 parts for organ and alto-saxophone, Grande Pièce Fantastique in 5 parts for organ and three saxophones (alto, tenor and baritone), Grande suite dans le style français in 7 parts for 2 recorders, 2 violins, alto-saxophone, harp and basso continuo, and Concerto pour flute à bec et orchestra in 3 parts for the same instrumentation. In 2019 Pieter formed a “neo-baroque ensemble” to play the last two works at the award-ceremony of the Viviane Conraadsfonds in AMUZ (Antwerp). Starting September 2018 Pieter is teaching keyboard instruments at Koningshooikt.

Die Verrückten is an attempt to combine the tradition surrounding the music for recorder consort with contemporary techniques. The piece is based on the very traditional form of the French baroque dance suite. Some of the characterising elements are the Ouverture starting with a slow movement (instead of a fast movement as seen in the Italian Ouverture). After this we can hear some typical dance forms: Allemande, Courante and Sarabande. The final movement is somewhat atypical. One would expect a lively Gigue but instead I opted for a Marche Funèbre.

The piece is characterised throughout because of its ‘odd’ places. These places have us suspect that something is going wrong, something crazy is happening, ‘have the performers gone mad?’. These impulses manifest themselves on different levels: harmonically (the extreme usage of chromatism or unexpected modulations), technical (the usage of odd techniques or extended techniques), physical (the performers combine certain body-movements with the playing of the piece), phrasing, etc. The goal is to create an atmosphere where nothing makes sense and is what it seems to be. Everything we hear has many possible meanings. We are literally made fun of. Hence the question arises with the audience: ‘Who are the crazy ones (Die Verrückten), the audience, the performers or someone else?’

Interested in booking us?
Or are you looking for a creative collaboration?
We'd love to hear from you!